The Importance of Productivity

This is an original article taken from the NIST Manufacturing Innovation blog.

Productivity matters. It matters a lot. Yet it often seems that folks talk about productivity, but don’t do anything about it.  At least, it feels that way to me when I go outside of the MEP National Network™, where we’re always focused on enhancing manufacturing productivity. And you could say that productivity is a personal crusade for me, as is evident in blogs I’ve written over the last few years.

As Ted Williams said,  “A man has to have goals — for a day, for a lifetime — and that was mine, to have people say, ‘There goes Ted Williams, the greatest hitter who ever lived.’” I’m not comparing my fame or baseball skills to Ted Williams, but I would like to be known for my goal of keeping us focused on productivity. Richard Lester wrote in 1998 that “the single best indicator of how well a nation’s economy is performing is its productivity... productivity is thus the critical link between how we work and how we live and the mark of a national economy in robust health is a high and steadily rising level of productivity.”

So, How Productive is Manufacturing? 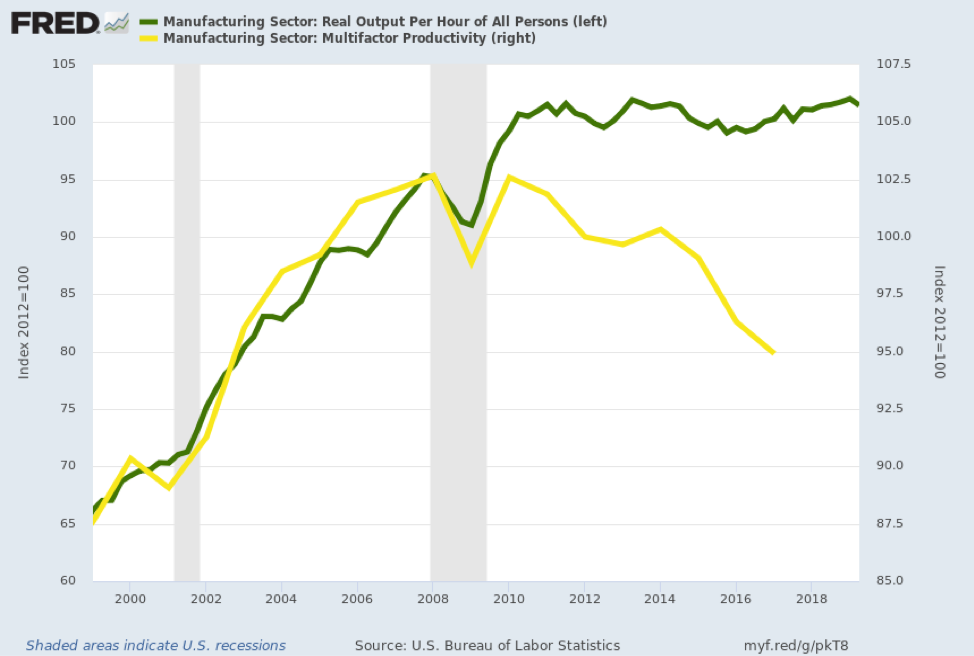 Many other industrialized countries are wrestling with the same issue. The causes for the productivity slowdown are not well understood and many have called it a “productivity paradox.” There is a lot of handwringing over the reasons for the fall off and it is likely there are many causes ranging from mismeasurement to more fundamental factors such as regulations, lower rates of innovation and R&D, lower rates of human capital formation and declining economic dynamism. I suspect there are multiple reasons for the slowdown.

Is There a Link Between Pay and Productivity?

Is there also a link between productivity and pay? I decided to pull some data from the Department of Commerce Bureau of Economic Analysis to look across the 50 states and see whether there is a relationship between the two. To do this, I calculated manufacturing productivity per employee (measured as Manufacturing GDP divided by number of manufacturing employees) across each state and then calculated compensation per manufacturing employee across each state and adjusted that for cost of living differences (if you want a copy of the data, please contact me). I wanted to see what the data would reveal. While it is not a sophisticated analysis, it is suggestive.  There appears to be a positive and not-insignificant link between productivity and pay across the 50 states. While it is not a perfect relationship, the chart suggests that states with higher manufacturing productivity also have higher rates of pay. 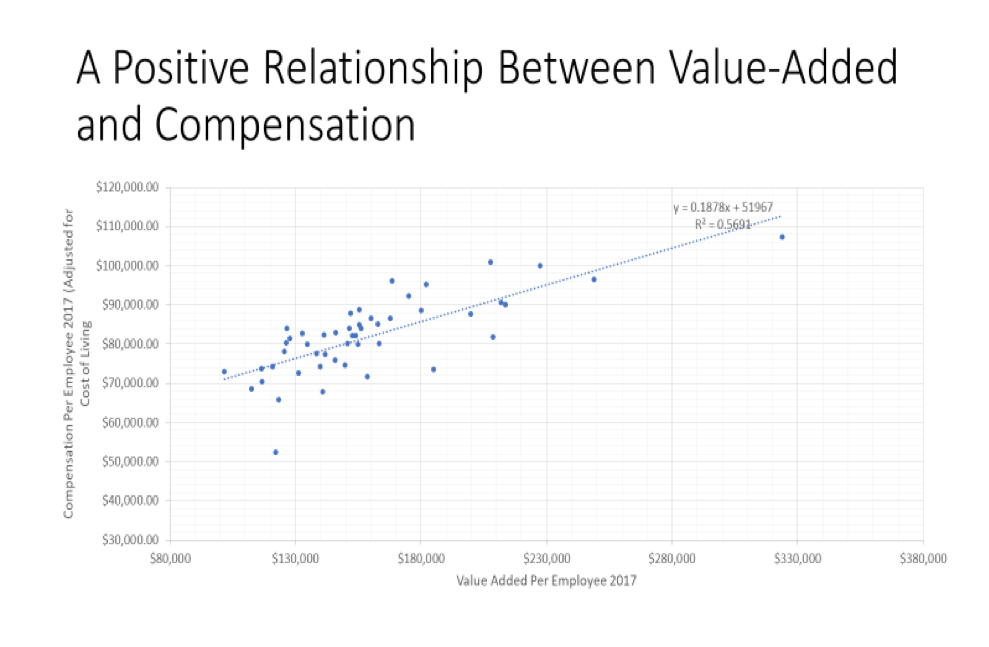 As William Baumol and his colleagues suggested 30 years ago, “for real economic miracles you have to look to productivity growth... in terms of human welfare, there is nothing that matters as much in the long run.”  The core rationale for a program like the Hollings Manufacturing Extension Partnership (MEP) is to close the productivity gap between larger and smaller manufacturers, improving manufacturing productivity generally. Productivity pays, as shown above, but it also pays for companies in terms of higher returns.

The 2017 American Innovation and Competitiveness Act (AICA) that reauthorized the operation of the MEP Program makes it quite clear. The AICA states that MEP’s objective is to enhance the competitiveness, productivity and technological performance of U.S. manufacturing. It is important to keep this goal in mind as we work with the nearly 293,000 small and medium-sized manufacturers across the U.S. Improving productivity is not an accidental activity, but something that must be planned. Productivity results from a commitment to operational excellence, a well-thought-out strategy and its effective deployment. This requires working on multiple fronts including reducing costs, growing the top line, adopting new technologies and working smarter.

What can be done to help move the needle? Companies and MEP Centers can focus on moving manufacturers into new and higher value-added markets, facilitating speedier development of new and higher value-added products (including service enhanced products) and helping companies to think about intelligent investments in areas like technology and lean manufacturing that can improve productivity. Many of these drivers of productivity can be influenced not only by government policies, but also by companies themselves. However, the challenge remains — what can an organization’s managers, employees and technical assistance providers do to improve performance? That’s both the challenge and the opportunity.

To help Illinois manufacturers improve productivity and competitiveness, IMEC launched the Illinois Manufacturing Innovation Voucher program. This program will lead to a total investment of $2.5 million in R&D and technology adoption for small and medium-sized manufacturers.

Learn more about the program: https://www.imec.org/innovation.