This is an original article by Ken Voytek, Chief Economist at NIST MEP.

I’ve made it my personal crusade to keep a focus on the fundamental importance of productivity to manufacturers, to the MEP Program, to the MEP Centers that do the daily work of helping small manufacturers boost their performance. It may seem strange to read a post about productivity given the current environment, but it remains important to both national economic and business success. Indeed, productivity will be even more critical as we recover from the current health and economic crisis. Currently, there is significant excess capacity of both capital and labor that we can reengage to help the economy grow faster and return to full employment and capacity utilization of plants as equipment is more fully used. In his 2004 book The Power of Productivity, William Lewis argues the real solution is not necessarily more capital or working smarter (although these things certainly help), but rather how a company organizes and deploys its capital and labor.

A Challenge and An Opportunity

As I wrote in November 2019, “productivity can be influenced...by companies themselves. However, the challenge remains — what can an organization’s managers, employees and technical assistance providers do to improve performance? That’s both the challenge and the opportunity.” In fact, Lewis suggested “productivity...is the most important objective that businesses and their management try to improve around the world” given that productivity is closely connected to profitability. In short, if a manufacturer can produce more widgets with the same level of inputs, then its profitability will increase. For the sake of our discussion here, a quick refresher—in economics, productivity is about producing more goods with the same inputs and efficiency is about producing the same amount of goods with less inputs.

Sparky Anderson, two-time American League Manager of the Year and member of the Baseball Hall of Fame, once observed, “Baseball is a simple game. If you have good players and if you keep them in the right frame of mind, then the manager is a success.” I think Sparky downplayed the importance of managers to a baseball team’s performance. A consistent finding in economics, as discussed by Chad Syverson, a Professor of Economics at the University of Chicago's Booth School of Business, in a paper for the National Bureau of Economic Research, is that sizeable and persistent differences in productivity exist across firms in the same industry even when controlling for the same measured inputs. Syverson suggests that these differences reflect internal factors that represent levers for a company to pull and leverage to improve productivity.

Management capital – my shorthand for how companies organize and deploy their resources – may be as important to boosting productivity as physical and human capital. It is likely that the characteristics and management of a company may be more important to its long run success rather than the industry it is in or the market it serves. I don’t make the assertion lightly, as we do have evidence that this matters to a manufacturer’s performance. A 2019 study by Bloom and others published in the American Economic Review concluded that management matters to a wide range of manufacturing performance dimensions. The study, using data collected by the U.S. Census Bureau from over 35,000 manufacturers across the U.S in 2010 and 2015, found that differences in management practices account for more than 20 percent of the variation in productivity. Analysis showed management practices were as important as R&D to productivity and more important than information technology or human capital. Manufacturers with a more sophisticated and robust set of management practices were not only more productive, but more profitable, and more likely to survive, pay higher wages, invest in R&D and innovate. 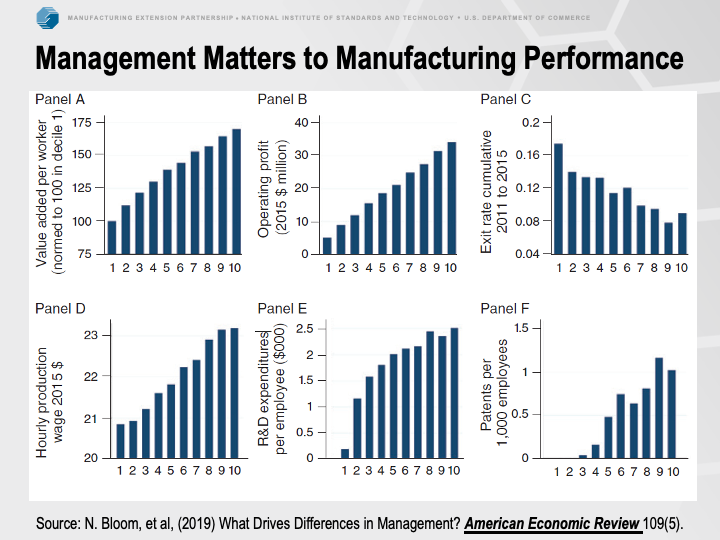 Improving the performance and productivity of manufacturing firms means that there are levers that manufacturers can pull to help them improve their performance. There is no magic bullet, however. Organizational and strategic choices must be made considering all aspects of an organization and how the choices are complementary – changing one element may require other additional changes in the organization and its strategy. Adopting new technology may have important implications for employee skills, but also may have other ripple effects across the company. For instance, focusing on flexibility and variety may require thinking in new ways as to how they interact and feed off one another.

Productivity is the ratio of the value added (or the amount produced) over the amount of some input such as labor (or the combination of inputs such as labor, equipment, etc.). In the long run, we need to focus on producing more. Moreover, there is increasing evidence that management consulting helps boost company performance. In Mexico, a recent randomized control trial performed as part of a study working with 432 small and medium-sized firms found that firms that engaged management consulting services boosted their performance compared to firms that did not. In addition, a 2017 study of the MEP National NetworkTM on firm performance highlights positive impacts of the work that MEP Centers do with manufacturing clients.

Management is about doing things right while leadership is about doing the right things, and Peter Drucker said many years ago that a company needs both to be truly successful.  As Hall of Fame pitcher Robin Roberts once said, "My feeling is that when you're managing a baseball team, you have to pick the right people to play and then pray a lot." I sure hope we all pick the right players and take the right actions.

Manufacturing Leader Buzz Session: Productivity in the New Normal
July 14 @ 11:30am
Join a unique roundtable session to share with peers the tips and strategies around productivity that help you to reshape your ways of doing business.

Manufacturing the Future: Challenges and Opportunities Webinar
Ken Voytek shares the national perspective on manufacturing, as the industry faces opportunities and challenges as a result of economic uncertainty.